Hadza (also known as Tindiga or Kangeju) is a language isolate spoken by approximately 1,000 people in the Tanzanian Rift Valley. I began studying Hadza in 2019. Below is a quick introduction to the language.
The Hadza people have lived in the area surrounding Lake Eyasi for a very long time indeed, certainly longer than any of their modern neighbours. The area of land that they inhabit has decreased significantly in recent times, however, due to the increased presence of other groups of people. Today, large communities in and around Hadzaland (such as Mang’ola and Matala) are inhabited predominantly by Datooga, and Iraqw, and Bantu-speaking peoples. Herding also brings the Hadza regularly in contact with Datooga pastoralists. To the west, Hadza are in contact with Ihanzu people.

No dedicated survey has been conducted to determine the number of Hadza speakers, but based on demographic surveys by anthropologists, Hadza is spoken by approximately 1000 people. This represents possibly the highest number of Hadza-speakers in modern history, but because of the serious threats posed to their land and their way of life, the language ought still to be considered endangered. Programmes designed to entice the Hadza people to give up their nomadic lifestyle in favour of sedentary agriculture; loss of land to farming, herding, and game reserves; and a tourism industry which increasingly commercialises Hadza culture are all affecting the health of the people, aspects of culture, as well as the vitality of the language. 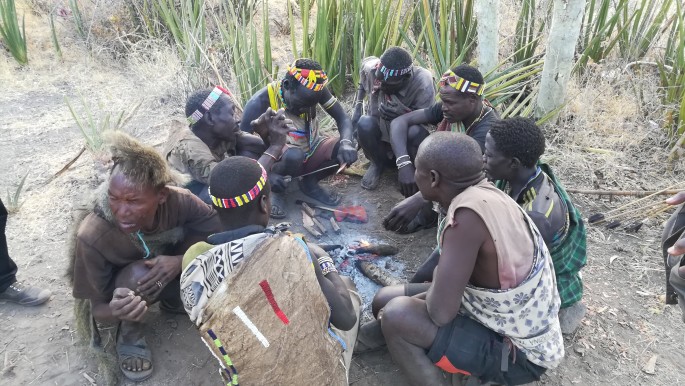 A common belief among the Hadza is that they were originally baboons until Haine, the lunar deity, made them human. The Hadza are often defined by outsiders by their practice of a nomadic hunter-gatherer model of subsistence, collecting fruit and digging roots, as well as hunting game large and small for food, and living in encampments typically of no more than thirty people, which regularly move to and from throughout the year.

Because of its use of click consonants, as well as the hunter-gatherer subsistence system of its speakers, Hadza was once thought to belong to the Khoisan group of languages. Now it is assumed that Hadza links to any sort of Khoisan are doubtful, and Hadza is best classified as a language isolate. Phonetically, Hadza possesses a system of 7 vowels, 45 pulmonic consonants, and 9 non-pulmonic ‘click’ consonants. There is also a contrast between high and low tone. Syntactically, Hadza word-order has been described as non-configurational: that is, ordering of subject and object in relation to the verb, as well as in relation to each other, is relatively free. It has also been reported that Hadza, in addition to its spoken variety, possesses two whistled registers: one used for hunting, and another reserved specifically for the nighttime. Further insights will come with more extensive analysis.